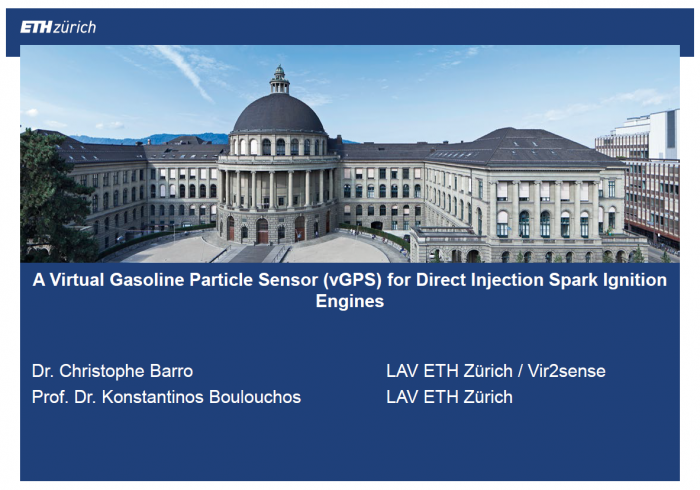 Particle formation is a complex process, especially in spark ignition engines. The chemical process of soot formation contains multiple important steps. In direct injection spark ignition engines, the known sources of PM formation are pool fire locations coming from piston or wall interaction with liquid fuel as well as from insufficient air-fuel-mixing. It is also known that in very low load conditions or even motored condition, the majority of particles are not soot and coming from wear and lube oil. The interaction between soot and non-soot particles is not yet fully understood.
In the present work, a virtual Gasoline Particle Sensor (vGPS) has been developed in the framework of the Horizon2020 project “Paregen” (https://www.paregen.eu). Within this project, novel detailed 3D and 1D/0D -modelling approaches as well as laser diagnostics for liquid fuel film and soot quantification in optical engines are used to further understand the soot formation process indirect injected spark ignition engines. The detailed models are combination of a validated flow field model, containing the local distribution of the mixture fraction as well as temperature including phenomena like spray-wall interaction or cycle to cycle variations, and a soot chemistry model. The Goal of this particular part of Paregen-project is to use the detailed models and measurements for gaining understanding and relations to develop a fast model. The fast model shall be able to run online as a virtual gasoline particle sensor; enable the opportunity for real time strategy adaptations or emission feedback control.

The vGPS contains sub-models to describe the dominant phenomena for the soot formation/oxidation process. The sub-models are used to estimate the fuel mass, which is present under fuel rich conditions, the cylinder pressure and temperature and a time scale as input for a soot model, calculating soot formation and soot oxidation. The phenomena included in sub-models are air-fuel- mixing, wall impingement and evaporation, combustion and heat transfer. Unknowns and engine specific phenomena are addressed with model parameters, which need to be calibrated.
The vGPS has been calibrated on a single cylinder engine under steady state conditions. The engine operation include stoichiometric, lean and fuel rich conditions. The calculated soot emissions are in good agreement with the measurements. Furthermore, the vGPS’ behaviour on a variation in injection timing agrees well with expectations known from literature and allows additionally outputting the share between soot formation originating from pool fires and from insufficient air-fuel-mixing. The calculation duration of one engine cycle requires ca. 10 ms on a state of the art Laptop.